I Was In An Accident With An Underinsured Driver. What Now?

Home » General Blog » I Was In An Accident With An Underinsured Driver. What Now? 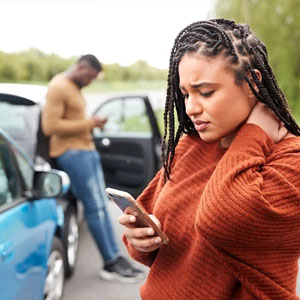 What can you do if you are involved in a car accident with an uninsured or underinsured driver?

Uninsured And Underinsured Motorists In NC

What’s The Difference Between Uninsured And Underinsured Coverage?

These two terms can be confusing, but they are very distinctly different. Does the other driver in the accident have insurance at all? If so, is it enough to cover your damages?

What is uninsured motorist (UM) coverage?

UM coverage is required under NC law (UIM coverage is not mandatory), and it protects you if you are in a car accident with a driver who 1) does not have insurance, 2) does not carry the minimum liability policy limits required by NC law, or 3) leaves the scene of the accident.

NC law says that to recover damages from your uninsured motorist (UM) policy, you must show that:

Phantom Vehicles And The Collision Requirement

When the at-fault driver leaves the scene of the accident or the owner or operator cannot be identified, this is referred to as a “phantom vehicle.” When a phantom vehicle causes you to crash, N.C. Gen. Stat. § 20-279.21(b) requires a collision for you to recover damages under your uninsured motorist (UM) policy – physical contact between the vehicles.

For example, in Petteway v. South Carolina Ins. Co., the Court of Appeals held that there was no UM coverage when the insured’s vehicle was forced off the road by a “phantom vehicle,” because there was no contact between the vehicles – even though a witness confirmed what had happened.

Underinsured motorist (UIM) coverage is not mandatory under NC law, but every driver should carry it.

UIM coverage “kicks in” when the at-fault driver’s insurance policy is not enough to cover your damages. Once all available liability policies have been exhausted, your underinsured motorist (UIM) coverage pays the balance up to your policy limits.

Purchase underinsured motorist coverage, purchase multiple policies for separate vehicles, and purchase limits as high as your budget can stand, because, if you are involved in a severe accident with catastrophic injuries, there is a good chance that the other driver’s policy limits will not cover your damages.

Is “Stacking” Of Insurance Policies Allowed In NC?

“Stacking” is when you combine the policy limits of multiple insurance policies (or vehicles covered under a single policy) to increase the maximum amount that you can recover from your uninsured motorist (UM) or underinsured motorist (UIM) coverage.

What does that mean?

To determine how much coverage is available under multiple insurance policies (interpolicy stacking), we must identify all policies where our client/ the injured party is 1) a named insured in the policy or 2) a Class 1 or Class 2 insured under NC law (whether the policy names them or not).

The injured person is covered as a Class 1 insured if they are:

When the combined policy limits of each separate UIM policy are greater than the total amount of liability coverage available, the difference between the two is the total additional UIM coverage that is available to the injured person.

Questions About Uninsured Or Underinsured Drivers In NC?

Your NC car accident lawyer will help you to understand the categories of damages that you are entitled to based on the facts of your case, to demand full and fair compensation in your settlement, and to try your case to a jury if the insurance company refuses to pay.

If you have been in a car wreck that was caused by someone else’s negligence, do not lose hope! Call Northstate Auto Law now at (336) 999-0944 or send us a message through our website to talk to an attorney who cares.